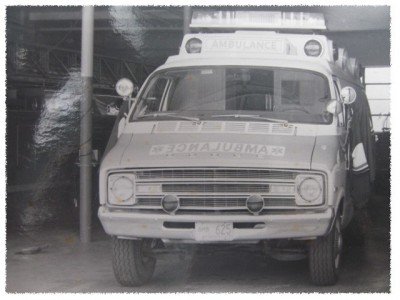 Since the late 70's, Northern Berkshire EMS (formerly North Adams Ambulance Service) has been in operation helping members of the community in their times of need.

Back in 1978, Geoffrey H. Sprague was chosen to be temporary manager of the newly formed ambulance service of North Adams by the planning board. Mr. Sprague was to set up the service and manage it on a trial basis.

Dr. Edmond P. Larkin said he recommended Mr. Sprague for the job because he needed someone "on top of the emergency service". Dr. Larkin was a registered nurse and an emergency medical technician at the time. He worked at ambulance services and was employed in the emergency room at North Adams Regional Hospital. Dr. Larkin said he didn't know how much they could pay Sprague and Sprague knew he wouldn't be paid until the ambulance was on the road.

About $35,000 dollars was needed to start the service so a sub-committee was created to raise funds and was chaired by Barbara Wagner. Many local area citizens, businesses, churches and municipalities quickly answered the call and the North Adams Ambulance Service was born.

For a while, the service was run out of the city's fire department building but soon was moved to its own separate location now on River Street. There are now four emergency vehicles and more than 20 technicians on staff. Still run on the generous contributions of the town and towns people, the Northern Berkshire EMS is there for you.